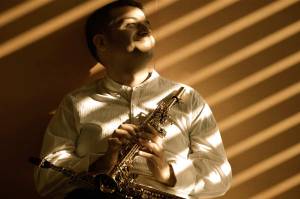 Various prizes stand out from his wide-ranging artistic career and as finalist in national and international competitions, obtaining qualification as senior teacher with the highest grades and unanimous “Honorable Mention” at the “Joaquín Rodrigo” Conservatory in Valencia.
He has performed and played solo in many centers – Paris, Bordeaux, Strasbourg, Berlin, Basel, Lisbon, Milan, Helsinki, Santos, Amsterdam, São Paulo, Madrid, Alicante, Santiago de Chile, Salamanca…, in various cycles and Contemporary Music Festivals (Musica Nova in São Paulo, ContemporaneaMente Lodi in Milan, ENSEMS in Valencia, Unerhörte-Musik in Berlin, Klang Festival in Helsinki, Mostra Sonora in Sueca, the Cervantes Institute in Paris, Smash Festival in Salamanca, the National Auditorium and Musicadhoy in Madrid, and Opus Festival in Bordeaux, etc… ). He has also released many works by composers of international standing, some dedicated to him, has made recordings for Spanish and for Portuguese Radio and Television, Radio 1 Finland… and has been invited to conferences, lectures and congresses on the saxophone.
In contemporary music performance, he has collaborated with international ensembles such as Espai Sonor and TDM_Trio de Magia, combining playing with teaching and research. Currently a member of the Feedback Trio.

Ricard Capellino has made many recordings: a CD with Espai Sonor Ensemble with works by Voro García, a DVD of music by José Manuel López López (La Grande Celeste) and images of filmmaker Pascal Auger. He has made two solo CDs, with saxophone works by Spanish composers Mauricio Sotelo, Voro García, José Manuel López López and Jesús Torres, and with music by Alberto Posadas, Mark Andre, Raphaël Cendo and Hèctor Parra. He has just completed a project on the new sound possibilities of the saxophone, from sopranino to bass, “New Perspectives on the Saxophone. From Sonic Exploration to Composition”.

He has since 1999 belonged to the Association of Music and Performing Arts Teachers, giving classes in many Conservatories, and has been invited to give master-classes and lectures in prestigious teaching institutions in Spain and overseas.